Most of the current breed of PLL LNB's seem to fit Chinese PLL chips made by RDA, and these use a 27 MHz crystal as their frequency reference (25 MHz for C band units - see note at end). No provision is included to trim the crystal onto frequency and they are in any case quite rubbery in terms of frequency stability. A higher order of stability is preferable for narrowband use.

Ebay often has 27 MHz TCXO's for sale and the use of these will much improve performance. An OCXO will be better still and is likely to provide +-50 Hz long term 3cm stability, judging by the performance of the GB3CAM 10 GHz beacon, which uses a Racal 5 MHz OCXO (see the GB3CAM website for graphs of frequency stability). Whilst 27 MHz OCXO's seem to be very scarce, there are many 3 MHz units on the surplus market, since Motorola used them in their old TACs equipment – and it takes surprisingly little extra circuitry to obtain a suitable 27 MHz signal from these.

There were two types of OCXO that were used by Motorola that I have come across, both made by Isotemp. The earlier equipments used the octal based OCXO036-40 unit. This has a 5v logic square wave output. Could the 9th harmonic be extracted from the 3 MHz square wave output at a useful, clean level simply by using passive selectivity?. It certainly could!

The second type of OCXO was the pcb mount model type OCXO127-10. On the face of it, this is not of immediate use in the circuit above because of its sine wave output. However, the data sheet specifies an output level of 4 volts pk-pk, and by adding a pair of back to back diodes across the OCXO output, enough harmonics are generated for the selectivity block to again produce useful output at 27 MHz. A 10 dB increase in output (to -30 dBm) can be obtained by feeding the back to back diodes through a series inductor as shown below.

The easiest route is to obtain a dual output PLL LNB, since one of the F connector outputs can be re-used as an input for the external high stability reference signal. At the time of writing, these are available for a total cost of £17 via Ebay (search for 'Octagon optima PLL twin'). The modification is very simple.

Also, a notch is required in the lid/screen divider wall to allow the link wire to pass across the two sections.

There is no need to disconnect the 27 MHz crystal – it will be sufficiently damped to stop oscillation as soon as connection is made to the F connector. With no connection, the internal oscillator will again operate, though at a slightly lower frequency than before modification.

The RDA chip (RDA 3565) reference input is very sensitive, and only requires about -40 dBm of external 27 MHz signal to operate (-44 dBm on the measured sample), and is tolerant to at least 10 dBm at the other extreme.


Originally, an MMIC was used after the filter, but as the results show, it certainly isn't needed from a signal level point of view. As a buffer, it may still be worthwhile – it would save having to re-tweak the filter every time it was used on a different length of feed-line.

A number of receivers have been produced using this arrangement, including the WebSDR rx near Retford, which should become publically accessible shortly. No 'oddies' have been noticed on any of them. In all cases, the 3 MHz OCXO output is used also to stabilise the 600 MHz LO VCO for the second mixer.

For predictable operation, I suppose one ought to terminate the feed at the LNB end into 50 ohms, though I have not done so on any of my installations, other than for these tests

Having just bought a 'Titanium Satellite' C1W-PLL on ebay, I find this to be fitted with another RDA PLL chip (this time, an RDA3570), however, it uses a 25 MHz reference. In the UK, there are plenty of Racal 5 MHz OCXOs on the surplus market, so one of these could be used in a similar arrangement.

Since the RDA3570 is also designed to be hard-wired for an alternative LO frequency of 5750 MHz, it follows that a 27 MHz external reference can still be used, resulting in a locked LO frequency of 5562 MHz.

Actually, the IF output for use on the 3400 MHz band is not that useful, being 1750 MHz, since the LO frequency is 5150 MHz. Ignoring the image rejection issue for a moment, the IF output for a 5760 MHz band signal is a much more reasonable 610 MHz (or 198 MHz*, if a 27 MHz reference is used). Whilst the front end amplifiers provide no gain at 6cm, and the image filter adds another 40 dB of attenuation, it is very easy to access the mixer input (the mixer is also part of the PLL chip). I'll write this up further at some time. Sensitivity directly into the mixer is about 1 uV for 12 dB SINAD in an ssb bandwidth.

[*For lower IFs (198 MHz, for example) a slight modification to the LNBs high pass filter that follows the RDA3570 mixer is required] 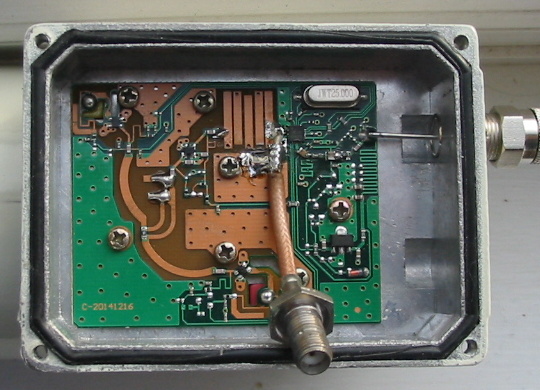