The only boards affected are the Tx PA and VCO/Rx front end pcbs. Although the Rx front end, once modified, will cover both the 6 and 4m amateur bands (50 and 70MHz), the Tx PA requires a couple of extra mods to do this, and these are mentioned after the main conversion details.

These mods were originally intended for PRF10 Base station use only (it uses the FM1000 mobile boards), and in the case of the Rx front end, resulted in slightly fewer changes (ie, not fitting the three ferrite cores descibed later) because in that requirement, the receiver VCO is not used on transmit also, and doesn't need the range that it does on the mobile transceiver.

Remove the main front-end can. Add another TDK core to the LO tuned circuit coil (L605), again leaving the top of the core 2mm below the top of the former. Remove L603 (the central air spaced coil), which gives access to smd capacitors C614 and C618. Replace C614 with a 4p7 (it was 3p9), and C618 with 10p (it was 2p7). Rewind L603 before replacement with a version having 2 more turns (1.25mm dia wire on 10mm ID mandrell). Fit to the board at the same height as before - ie same as L602 and 604 either side. Likewise replace L602 with a version having 2 more turns, but tapping the coil at the same place as the original (second turn in from the ground end). Finally replace L604 also with a coil having two more turns and with the tap in the same position as the original (last turn, live end)

Replace the lid and fit in the FM1100. Set receive

channel 1 (Par 101.01) to 68MHz and check the VCO lock volts. If necessary, adjust the VCO trimmer cap (CV658) to give 25v. Now monitor receive SINAD. With L602-604 tweaked a 12dB figure should be obtained for about 0.22uV. Now reprogramme channel 1 to 54MHz. This can only be done with PDP (not a CDP) - and slight of hand is still needed (because 54MHz is not only outside of any existing FM1000 band, but also below the overall range 68-520MHz, which even the PDP would reject as being non-valid) The process is as follows:

Check the SINAD at 54MHz. It should also be about 12dB for an input of 0.22uV. If the SINAD is poor, adjust the tracking pot RV601. It would then be worthwhile to check the performance again at 68MHz, re-tweaking L602-604, if it has deteriated from its initial SINAD.

The entire antenna filter circuit has been re-worked - only one value remains as it was on E band. This may seem excessive, but it ensures a good broadband 20dB return loss figure from 50 through to 70MHz, and is well worth-while really. Elsewhere, the mods are surprisingly few, concentrated mainly around the output stage. Even so, the efficiency falls rapidly towards the 54MHz end, because of a lack of inductance in the first section at the collector - this L is printed, so cannot be changed without taking a knife to the track and adding a small value coil. As will be seen later, this is the very mod that has to be done to extend the range down to 50MHz. 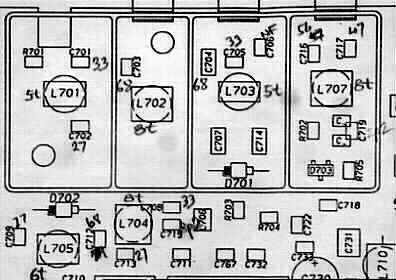 Change all caps mentioned, to the new values shown above. Replace with similar types! (actually, 50v sweepings-off-the-floor types will do, even if the voltage rating isn't enough in theory). Adding these caps is quite difficult. It might even be sensible to remove the filter screen first, but I have never felt desperate enough to go that far.

Now the filter coils can be replaced. Note that the '8 turn' ones will have to be wound from scratch (the others either are directly available from what was removed, or can ones with a turn removed). Note that '8' turns is really 7.75, but its less confusing to define as '8', because that equals the number as counted from above. For the 8 turn coils use 0.8mm enameled copper on a 4mm mandrel. Wind in the same hand as the originals (this is important)

Remove both L709 and L713 (they will not be re-used). Likewise remove C721, 723-726 - these are all the larger hi-Q chip capacitors. Replacement of all items apart from L713 and C726 depends in value on what the final use (ie, for extended frequency coverage down to 50MHz, see values listed at end of article). For F0 band use, the following applies:

Only two more components need be change, and these are the interstage capacitors C748 and C749 between TR702 and TR703, as below; 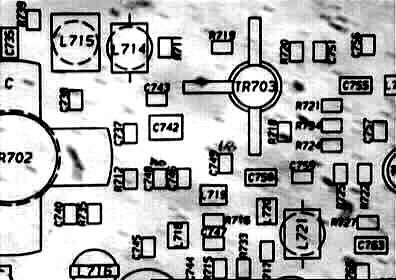 Return the Tx PA pcb to the chassis, and reconnect all leads. At 25W output, the FM1000 supply current should be about 4A. The peak deviation pot on the analogue board will need resetting, as will the mod balance pot. These are RV52 and RV51 respectively. The balance pot is best adjusted by putting in audio at 300Hz (at a level 20dB up on the 60% level), and adjusting for null waveform at TP1 - see below: 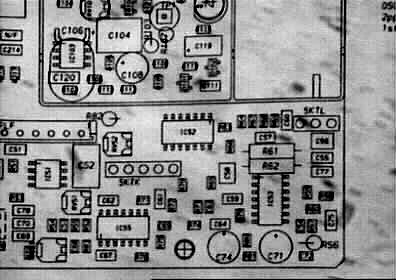 Additional Tx PA mods to enable operation down to 50MHz

These mods are concerned solely with the output stage collector match, and will result in efficient operation at 50MHz. If the added inductor is 'tweaked', it is also possible to get 25W at both 50 and 70MHz, making the FM1100 a useful dual bander (as mentioned at the beginning, the receiver easily covers both bands). 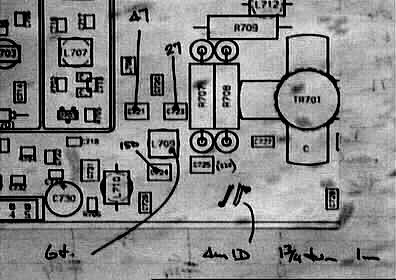 The Tx PA should then look something like this: 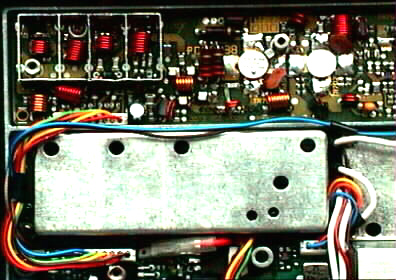