More to be regarded as a ‘Technical Topics’ piece than a definitive full-detail offering, this page describes an analogue, fast responding, high resolution signal strength meter that is ideal for aligning relatively large diameter dishes typically in use for QO-100 reception at 3cm. It uses the RSSI output of a common limiting FM amplifier/quadrature IC fed by a mixer operating in direct conversion mode, connected to the system LNB. Admittedly, it is rather extravagant in its use of both a packaged double balanced diode mixer and Chinese ADF4351 synthesized signal source, but it results in a unit that is a joy to use just when you need it most, ie, during those final finicky dish adjustments. In addition to its excellent resolution, the RSSI’s log characteristic results in a meter sensitivity that is essentially constant over a very wide range of input level, so whatever the IF gain of the particular system LNB in use happens to be, the only thing that really needs to be adjusted is the alignment meter ‘set zero’ pot.

The near-instantaneous meter response to level changes during dish adjustment makes a very welcome change from the delay found in many digital equivalents. 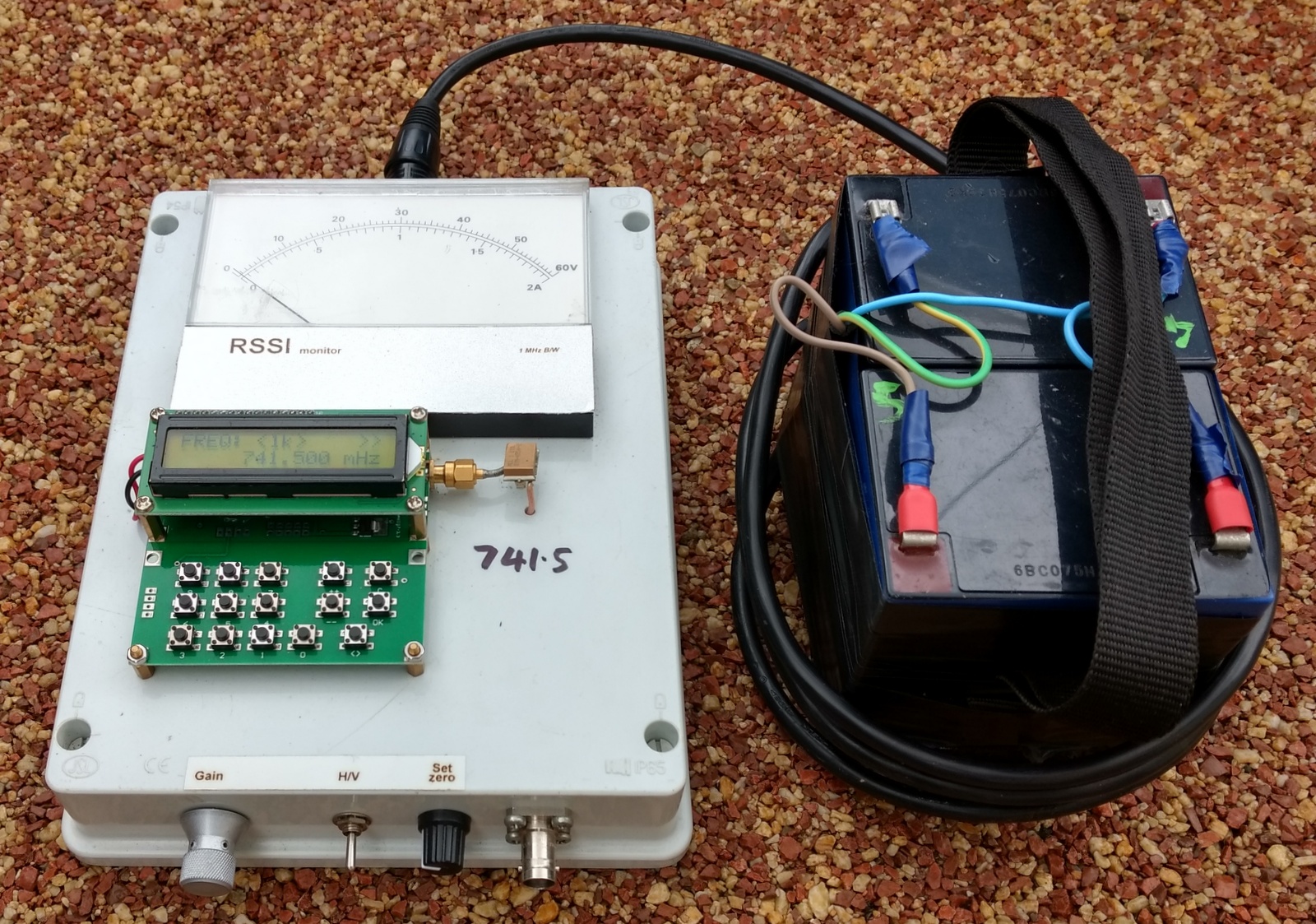 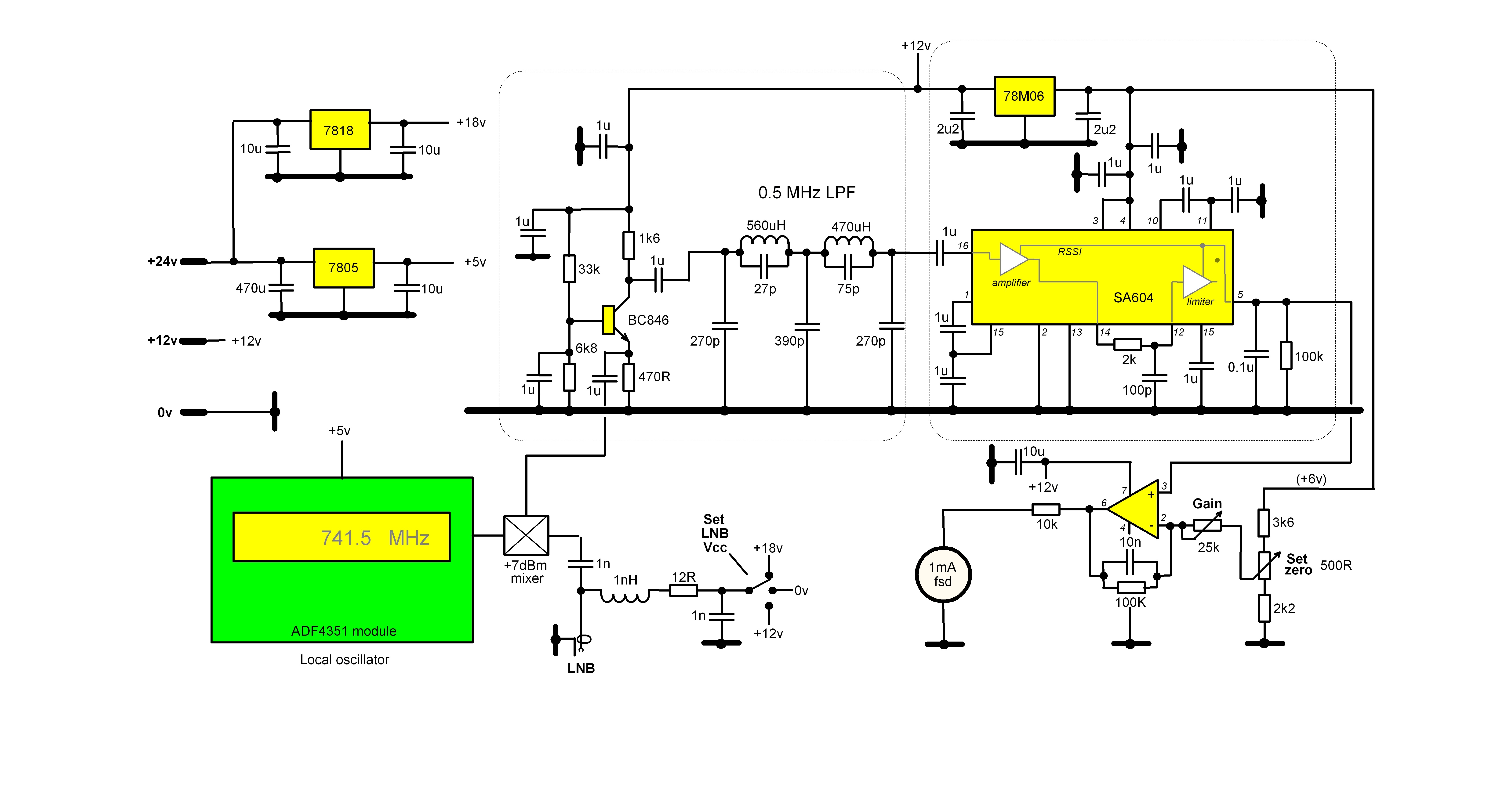 The low pass filter values shown in the circuit diagram are optimised for alignment using the QO-100 wide-band beacon at 10 491.5 MHz. Assuming the system LNB LO is running at 9750 MHz, the result will be an IF centred at 741.5 MHz, and this is also the frequency that the ADF4351 is set to, so that the output from the alignment meter mixer will include two components superimposed on each other, 600 khz or so wide, with their lower edge extending down to dc. For our purposes it doesn’t matter that these sit on top of each other since they are effectively pseudo-random and will combine to produce an increased signal level. The low pass filter has a corner frequency that is set to slightly less than 600 khz, so that LO frequency error in both the LNB and ADF4351 module becomes a little less critical. It provides the selectivity necessary to reject other signals in the band, though the meter will inevitably remain sensitive to transmitter alc changes caused by variable receiver loading at the satellite.

Pretty much any +7 dBm LO level double balanced diode mixer rated to 1 GHz should work in this circuit, since the ADF4351 output level will be at least +4dBm and given the high LNB gain, at this low LO level any increased mixer loss would not be of any importance in this application. Likewise, any op-amp with an input and output range that includes its negative supply rail will work in this circuit. One section of an LM324, for example, would fit the bill nicely.

Component values shown either side of the ‘set zero’ pot reduces its range somewhat, but does result in a nice silky feel to the pot adjustment. A more forgiving arrangement would be to use a higher value pot – say 5k, and pad it later to reduce the range down to a comfortable level.

Linear regulators were eventually used because standard low cost Chinese step up and step down assemblies proved to be far too noisy.

When setting up antennas, it is interesting to note that the 10 491.5 MHz allocation is also used by several other satellites, so despite the good selectivity of this alignment meter, on initial dish adjustment, expect to suffer an amount of confusion before the correct signal is found.

Its high sensitivity also makes this meter a good demonstrator of warm ground/cold sky noise difference when fed by an LNB, which might be educationally useful on occasion.