The receiver had seemed a little deaf for the best part of a year, and it finally failed at the beginning of May. Inevitably, the cause was water ingress. For a Full report, please click here.

Also, a second front-end unit has been built so that we can have something actually on the tower, with full 360 degree coverage of the far horizon. Details here.


The Bawdsey remote SDR installation was removed off site in 2009, when permission to operate there was effectively revoked. No internet connection was ever realised from that site, though Dave G4HUP did record some decent dx, and it has now found a very good new home at Mow Cop and is about to be made accessible via WebSDR thanks to the efforts of Martin, G7CKX. 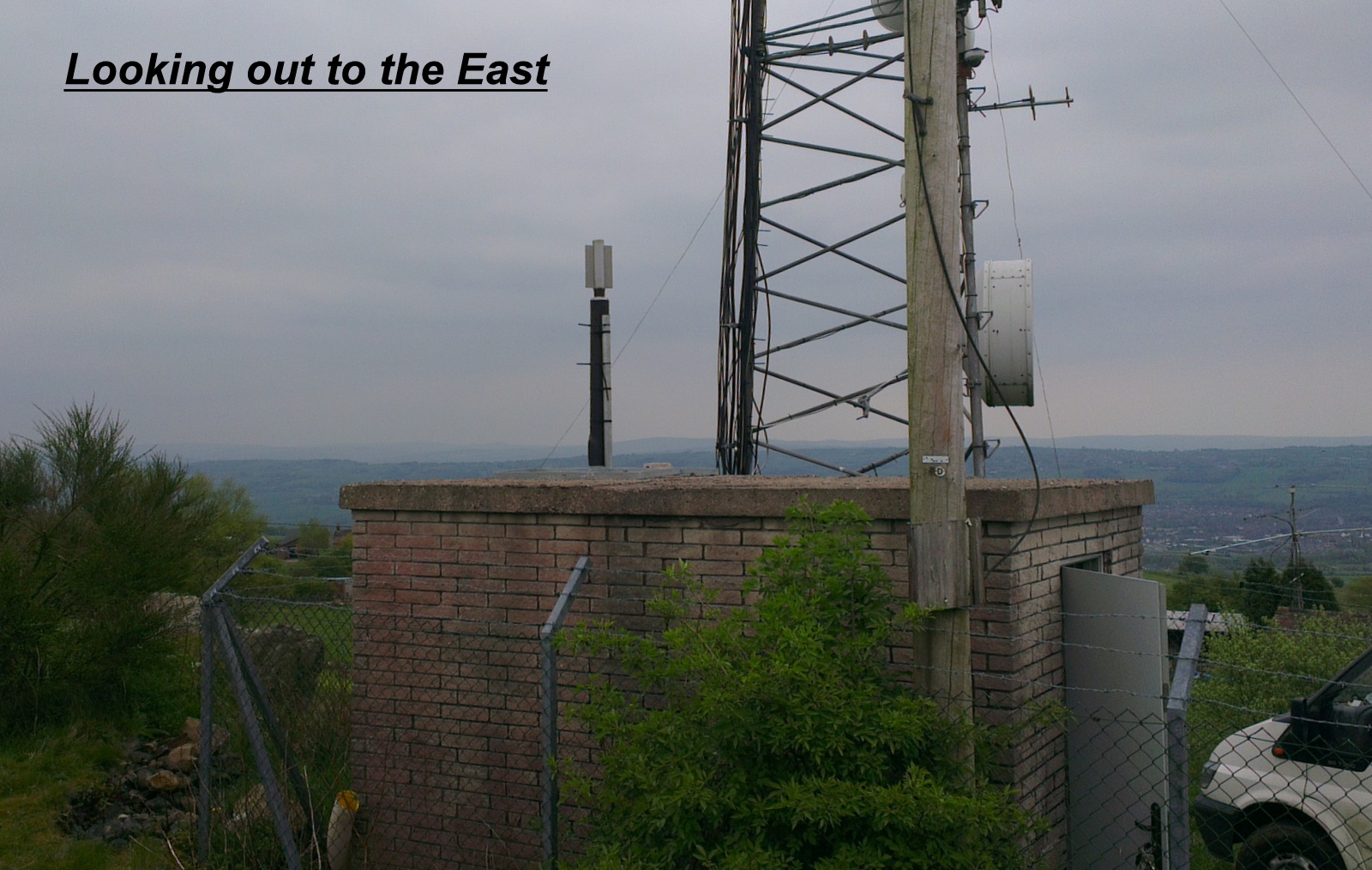 To date, the antenna has remained firmly attached to the site cabin roof - at some point, either it or a duplicate antenna should make it onto the tower, adding at least 10m to the height. This additional height above ground would ensure that the current shadowing to the North and North-West will be eliminated.

A single192 kHz window centred on 10 368.855 MHz is currently being used. The following UK beacons are therefore covered:

Plus, just outside of +-96 kHz, but still available as alias* signals are:

Plus well over a dozen mainland Europe beacons.

Notes on the original Bawdsey 3cm receiver This receiver uses the LNB based converter described elsewhere on the index page.

To obtain a nominally even azimuth gain, a slotted waveguide antenna with side wings has been used. This has been produced by David Wrigley G6GXK, and is shown below. Multiple slots provide elevation gain.

Although both WR-20 and C120 waveguide input LNBs are available, they are not very common (particularly with 9.75GHz LO and extended lower band edge of 10.75GHz). It was discovered that on a couple of brands of mini-dish LNB that the first choke ring provided a tight fit for a 22mm straight copper coupler, providing a suitable interface for 22mm copper pipe to be used as waveguide.

The next requirement is a transition from 22mm circular waveguide to WR-16.

Amazing what can be done with a rubber mallet...

Tuning screws were added to correct the inevitable mismatch, though this turned out not to be too bad, the un-tweaked return loss being about 10dB. Originally, a seperate coupler was envisaged to insert the reference (LO) signal whilst providing some directivity, but has not been entirely satisfactory, so a simple coupling probe has been added to the transition - this explains the short sma flying lead.

An HP 346A noise source was used to feed an sma-to-WG16 adaptor, which was bolted to the end of the transition section shown above, and the tuning screws adjusted for best sensitivity (measured via the Bernie box at 18MHz). Repeatedly switching the noise source on and off gave the following result: 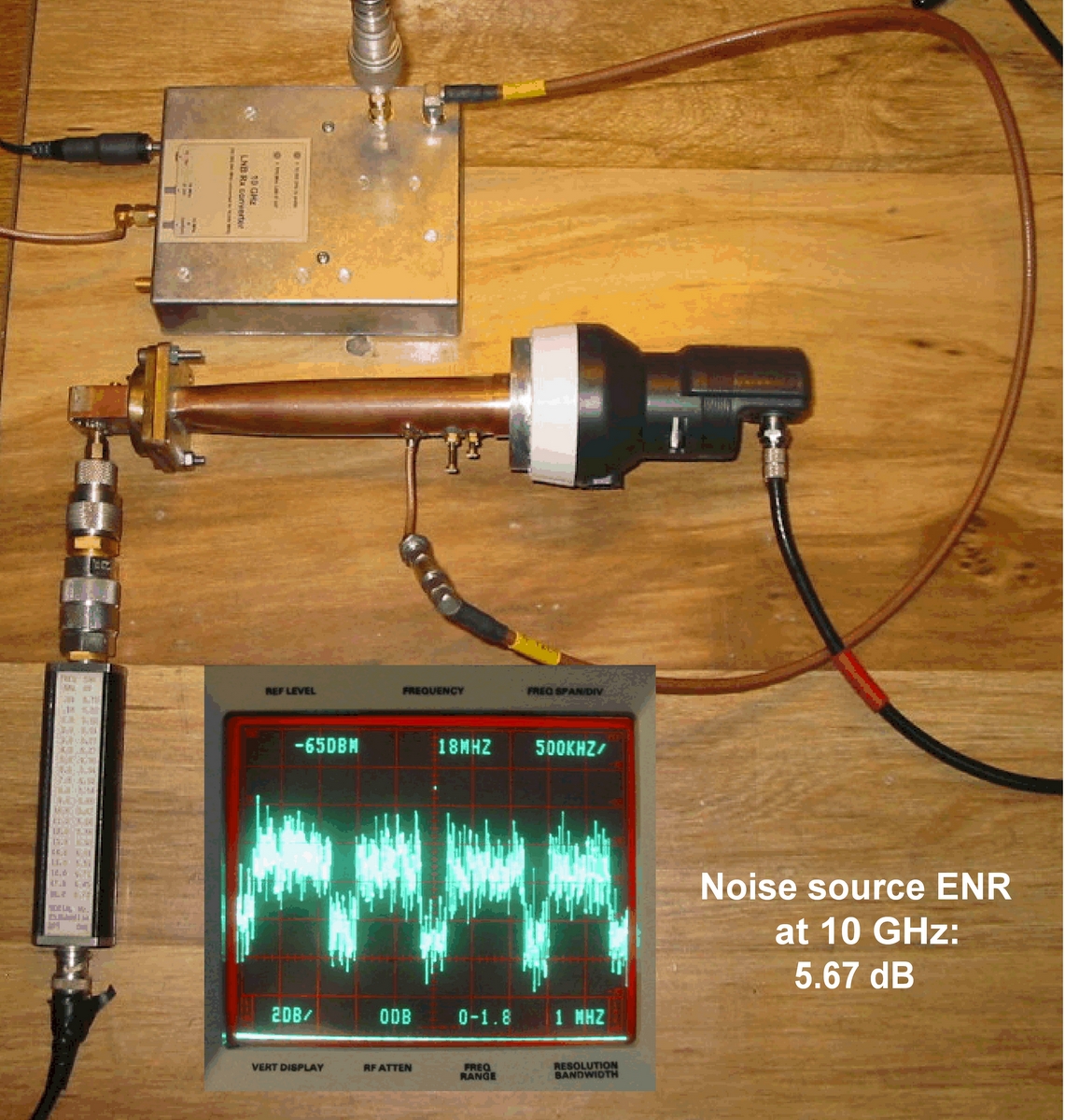 The LNB  housing is a 1m length of Wickes soil pipe. This provides a moderately good fit to the 4" mast. Note that the reference feed tail on the transition has been replaced by a bulkhead sma connector. Not only does this give a mechanically beter arrangement, but it also allos the probe length to be reliably set (and adjusted).

A final tweak of the matching screws on the transition piece was then made - it did make half a dB difference, which is a slight supprise.
The following set-up was used for the tweak. 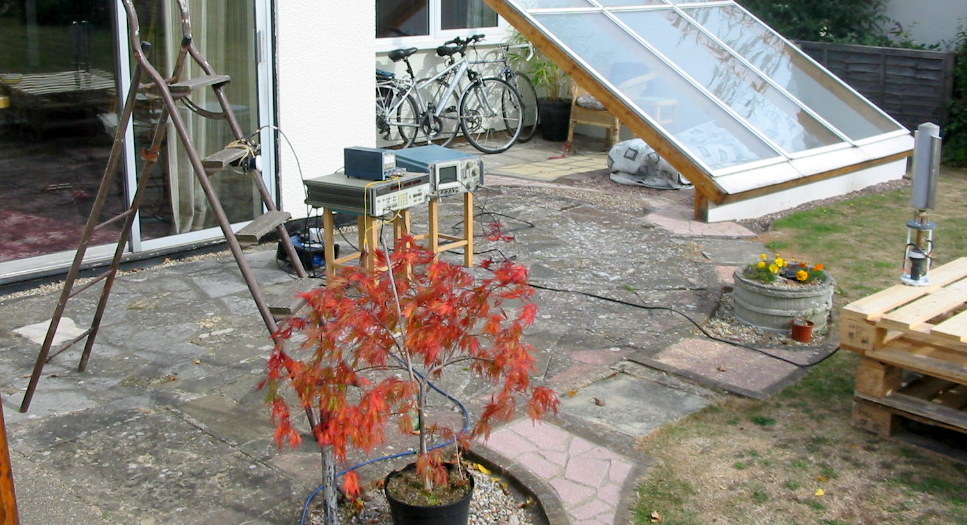 A 30 dB amplifier was added to the HP noise source, which fed the antenna fastened to the ladder on the lhs of the picture (probe fitted within an old Grundig LNB).  The receive antenna/LNB combination (rhs of picture atop three wooden pallets) then fed the converter via 8m of twin coax. Output from the converter was split between the noise figure meter input and a spectrum analyser, used as a monitor to check all was well. Using the noise figure meter for this adjustment is good, because the meter can be set for heavy averaging.